West Austin is known for its picturesque Texas Hill Country views and beautiful homes. This area of Austin not only offers residents great views, but also top-notch schools, great shopping, and golf courses. From luxury estates to condominium developments, West Austin has something for all types of buyers. While West Austin is home to numerous warm and friendly, conveniently located neighborhoods, it is also home to two of the seven Highland Lakes, Lake Austin and Lake Travis. Whether you are searching for a home with direct lake access or one with a hill top view, you are sure to find it in West Austin.

Located directly west of Downtown Austin, where the hustle and bustle of the city stops and the tranquility of quiet, established neighborhoods sets in, is an area commonly referred to as West Central Austin. West Central Austin is known for its historic homes, oak-lined streets and centrally located neighborhoods. Residents of West Central Austin also enjoy the area’s wide variety of stylish boutiques, numerous restaurants, cozy coffee shops and unique antique shops. From young professionals to families, West Austin is home to a diverse population. If you are seeking a home in the heart of Austin, TX but don’t want to deal with the fuss of the downtown urban living, West Central Austin is just the area for you.

Its close proximity to downtown, Lake Austin and exemplary schools make Westlake Hills one of the most desirable areas in Austin to live. Although Westlake was once considered the outskirts of Austin, the area is now considered central to the city. The Westlake Hills area is just minutes away from popular Austin attractions such as Barton Springs, the 2nd Street District and Hill Country Galleria, yet it continues to give off an upscale, small town feel. Westlake offers some of the most exclusive real estate in Austin. If the luxury homes, hill country views and established neighborhoods don’t attract you, then maybe the well-regarded, award-winning schools will. Students living in Westlake attend schools under one of the best school districts in the state, Eanes ISD. 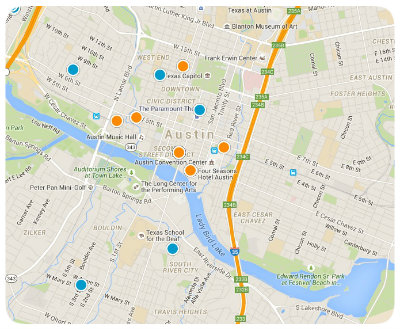 Learn how to use our site!